“David Andalcio’s entire business philosophy revolves around “thinking big”.  Like many successful entrepreneurs, thinking about the big picture is a default strategy.  He avoids instant gratification and instead makes decisions based on future successes.  Andalcio started his company, Wynndalco Enterprises, LLC, in 2009, offering computer systems support to Chicago Public Schools, primarily.  Since then, the company has grown to support the school district in Dallas, it manages warehouses and inventory for CPS and PACE, and it provides engineering services to the public and private sector. 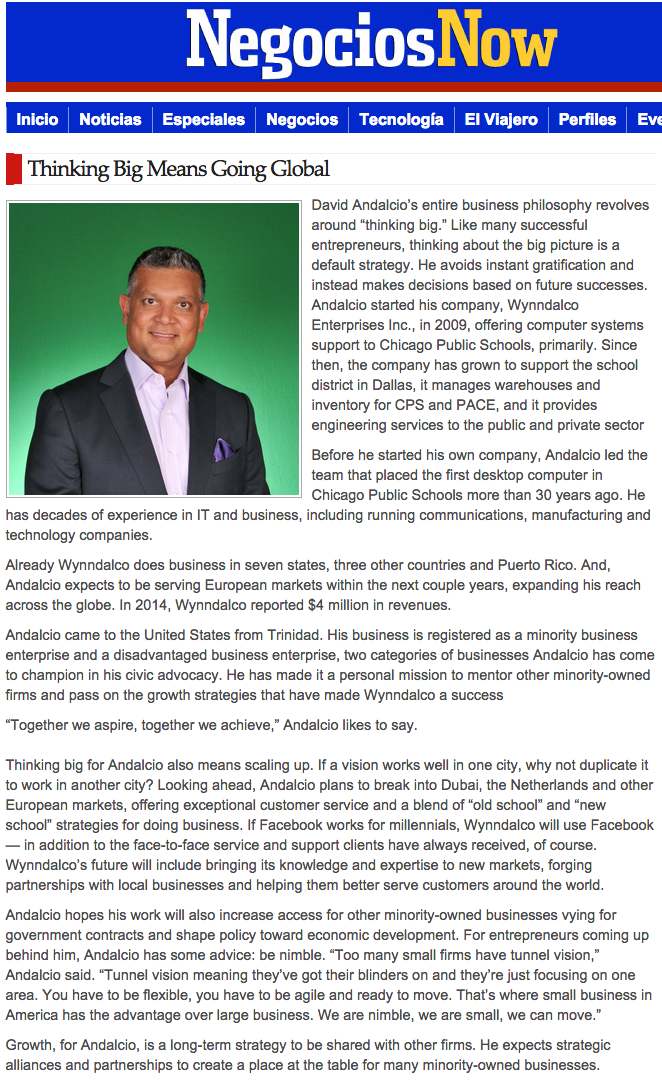 Before he started his own company, Andalcio led the team that places the first desktop computer in Chicago Public Schools more than 30 years ago.  He has decades of experience in IT and business, including running communications, manufacturing and technology companies.

Already Wynndalco does business in seven states, three other countries and Puerto Rico.  And, Andalcio expects to be serving European markets within the next couple of years, expanding his reach across the globe.  In 2014, Wynndalco reported $4 million in revenues.

Andalcio came to the United States from Trinidad.  His business is registered as a minority business enterprise and a disadvantaged business enterprise, two categories of businesses Andalcio has come to champion in his civic advocacy.  He has made it a personal mission to mentor other minority- owned firms and pass on the growth strategies that have made Wynndalco a success.

Thinking big for Andalcio also means scaling up.  If a vision works well in one city, why not duplicate it to work in another city?  Looking ahead, Andalcio plans to break into Dubai, the Netherlands and other European markets, offering exceptional customer service and a blend of “old school” and “new school” strategies for doing business.  If Facebook works for millennials, Wynndalco will use Facebook – in addition to the face- to- face service and support clients have always received, of course.  Wynndalco’s future will include bringing its knowledge and expertise to new markets, forging partnerships with local businesses and helping them better serve customers around the world.

Andalcio hopes his work will also increase access for other minority- owned businesses vying for government contracts and shape policy toward economic development.  For entrepreneurs coming up behind him, Andalcio has some advice: be nimble.  “Too many small firms have tunnel vision,” Andalcio said.  “Tunnel vision meaning they’ve got their blinders on and they’re just focusing on one area.  You have to be flexible, you have to be agile and ready to move.  That’s where small business in America has the advantage over large business.  We are nimble, we are small, we can move.”

Growth, for Andalcio, is a long- term strategy to be shared with other firms.  He expects strategic alliances and partnerships to create a place at the table for many minority- owned businesses.”